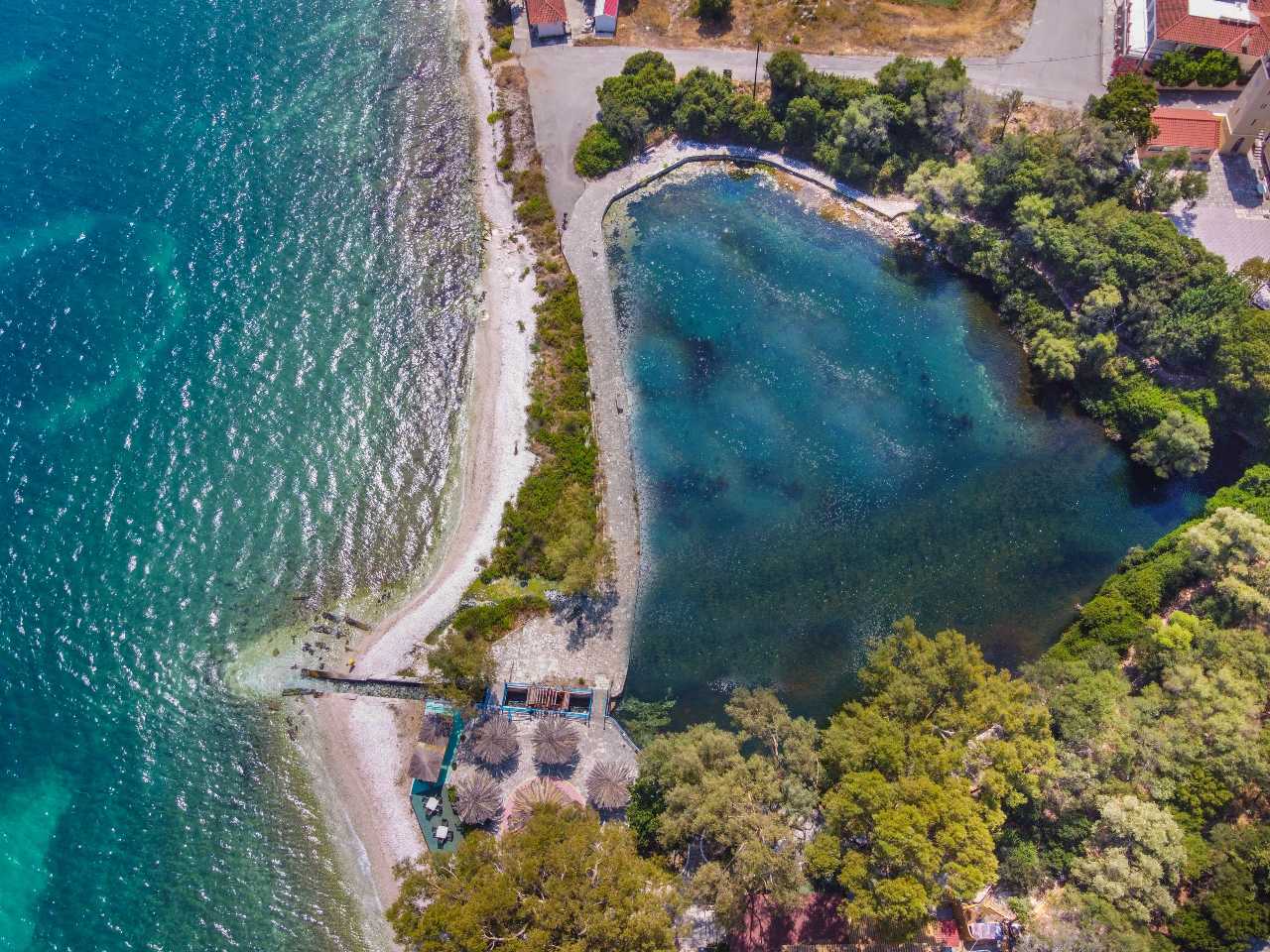 ​​​​​Karavomilos Lake is located at the homonymous village, 2.5 km NW from Sami and fed by a submarine karst spring of brackish water. Both village and spring have been named Karavomilos (deriving from the Greek words karavi = boat and milos = mill) after a watermill that worked by using an iron boat wheel (Figure 1). However, according to previous reports, back in 1890 there were more than one watermills that used to operate by using the emerging brackish water which continues to flow up to the present. The spring is of great geological and biological interest; it makes part of a karst network developed in the Sami area, which is connected through an underground karst system to the Sinkholes of Argostoli.

The spring was formed due to the intensive karstification that characterizes the area because of its location and its lithology. The area of Sami is located close to the thrust (big fault) of the Ionian zone on the indigenous Pre-Apulian zone. Thus, the area is characterized by intense tectonic activity. This has as a consequence the strong fragmentation of the carbonate rocks (limestones), which mainly constitute the two zones, and the creation of underground and surface forms of karstic dissolution. This spring constitutes a discharge spring of a natural karstic cavity in Upper Cretaceous(100.5-66 My) thin bedded limestones of the Pre-Apulian zone, located 80m from the coast and isolated with a wall from the sea, forming an artificial lake. This lake is almost circular, with brackish water gushing from its bottom and outflowing in the neighboring sea, in the bay of Sami. The diameter of the lake is 50m, its depth is about 1m and its bottom is covered by algae and mud (Figure 2).

After cave diving exploration, a siphon was discovered which starts from the west bank of the lake where the depth reaches 3m (Figure 3). Specifically, the cavity continues as a 260 m long siphon, with a maximum depth of 15 m and an average depth of 7m. 20m from the entrance two small side caves are found, while 130m from the entrance, the siphon expands and it forms a spacious chamber. 70 m further a second chamber develops, which ends to the right into a small cavity with aerial exposure while on the left another small chamber is found. On the floor rockfalls and stalactite fragments can be observed, which towards the end of the siphon do not allow further the passage. The continuity of the siphon connects Karavomilos with the rest of the karstic network of the area (Figure4). 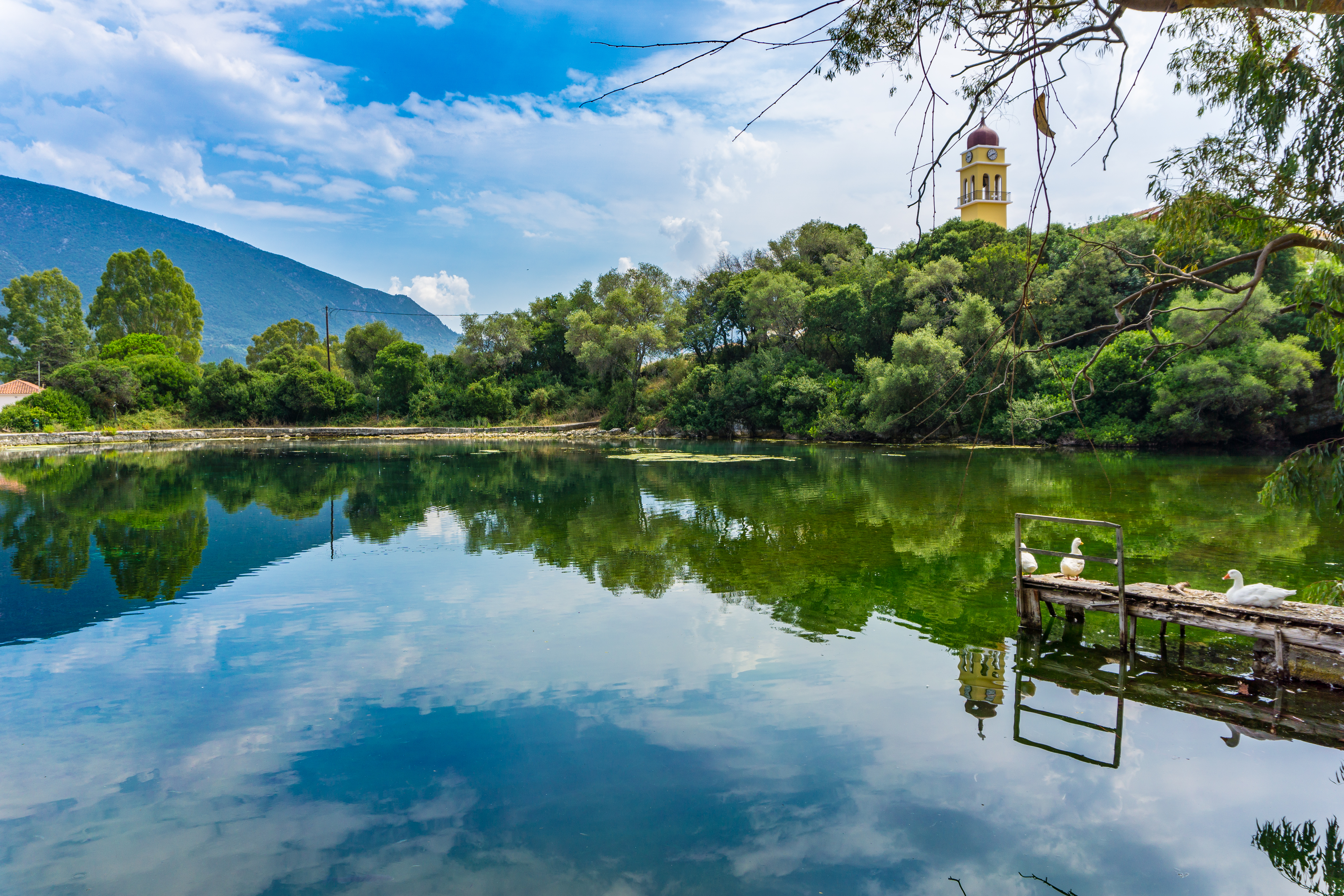 The connection of Argostoli Sinkholes with Karavomilos springs was certified by Maurin & Zötl in 1963, after pouring uranium dye in the Sinkholes, which was detected 14 days later in the Karavomilos springs. Sea water continuously enters the fragmented limestone rocks at the Argostoli sinkholes with a flow speed of 3 m3/sec, flowing underground towards the eastern side of Kefalonia (Sami region) and mixes with fresh water that percolates into the carbonate rocks of Ainos Mountain. As a result, the fresh water joins with the seawater, crossing underground the island from Argostoli to Sami and gushes up as a spring of brackish water 15 Km to the east, in the wider area of the coastal zone of Karavomilos. The altitude difference between disappearance and reappearance of the water is mainly due to the mixing of salt water with fresh water.

The flora of Karavomilos Lake has not been studied sufficiently. However, the few available data show that the area presents a notable diversity in orchids, some of which are the species Οphrys fusca, O. gottfriediana and O. luteα. Regarding the fauna, one can observe European Eels (Anguilla anguilla, a Critically Endangered species, according to the IUCN) and mullets (Mugil cephalus), as the underground water surfaces, whereas more marine species are observed closer to the sea. In the vegetation, surrounding the lake, several small passerines occur and, moreover, the visitor will commonly encounter, both in and out of the water, ducks and geese, accustomed to human presence. Occasionally beautiful birds, such as the Grey Heron (Ardea cinerea) and the Little Bittern (Ixobryxhus minutus) will also visit the area. It should be noted that at a neighbouring stream, both terrapin species of Greece have been recorded (Emys orbicularis - European Pond Terrapin and Mauremys rivulata -Balkan Terrapin), whereas the Ionian Wall Lizard (Podarcis ionicus), a Balkan endemic, is common in the area.