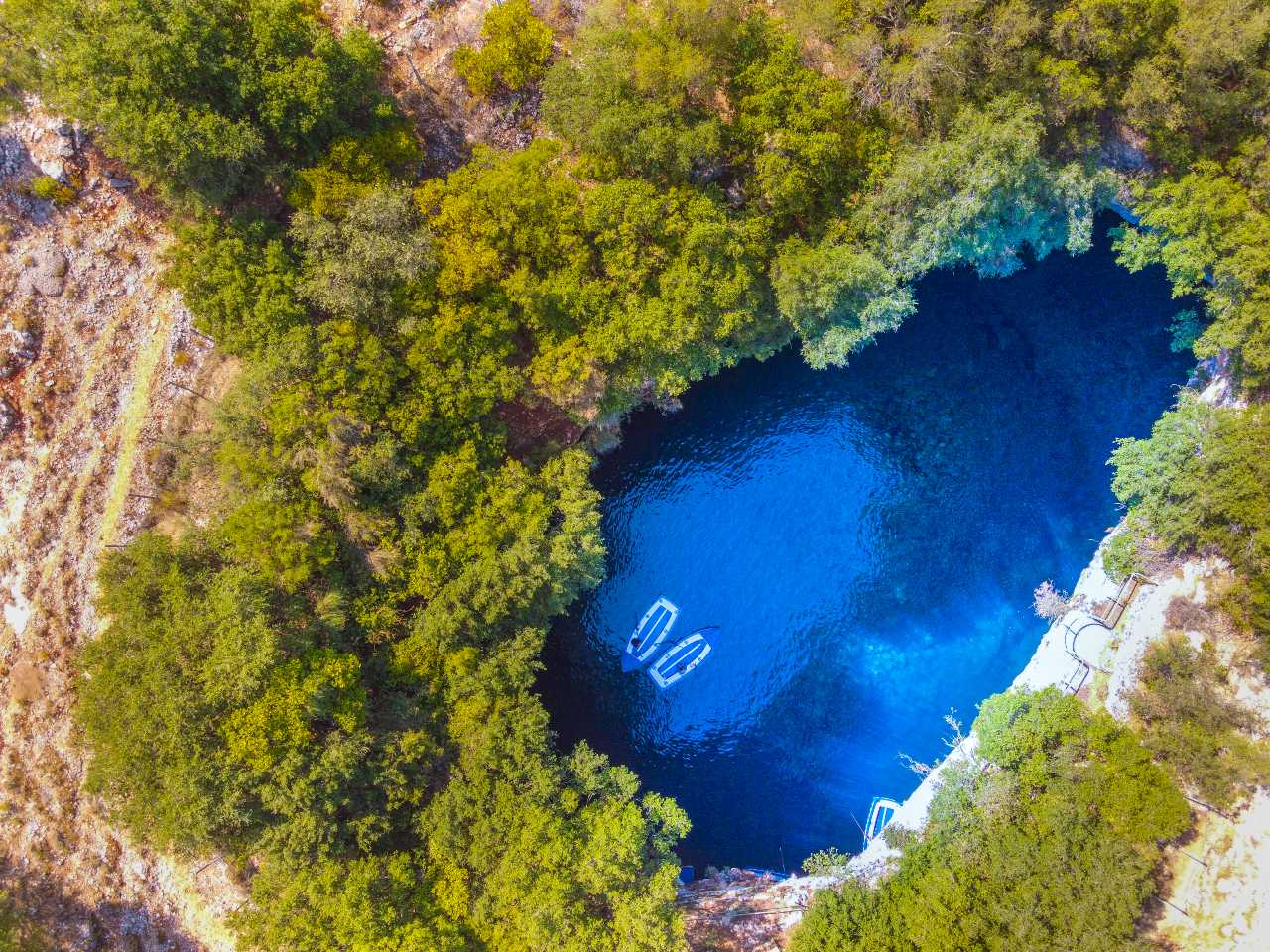 The cenote of Melissani is located on the southeastern slope of Frydi hill near the village of Karavomilos, 2 km NW of Sami. It is one of the most important caves in Greece as it presents special geological, biological (or better ecological), archaeological, aesthetic and mythological interest. It constitutes part of the wider karstic network of Sami.

The name "Melissani" comes either from the nymph "Melissanthi" who committed suicide by falling into the waters of the cave after god Pan rejected her love or from  folk tradition after the maiden shepherd Melissanthi who accidentally fell in the cave, searching for her lost sheep or less likely  has its roots in Homer’s Odyssey where the cave is cited as the home of Melisses (human souls, literally “bees”) and after laying his eyes on it, following Goddess Athena’s suggestion, Odysseus recognized his homeland. The use of the cave as a sacred site in antiquity has been documented from excavations on the small islet in the center of the lake, which yielded 4th and 3rd century BC artifacts that attest the worship of the half- goat god Pan and the Nymphs (hence the Melissani Cave is also called the Nymph Cave). The factors that seem to have made the cave ideal as a place of worship were its vaulted shape, its inaccessibility, and the presence of the aquatic element along with the vegetation and the complex geometric surfaces formed by stalactites.

It is a cenote, a submerged doline, with a NNW-SSE orientation developing in thin to medium bedded Upper Cretaceous (100.5-66.0 My) limestones of the Pre-Apulian zone and its shape is determined by the main system of joints that occur in the region. The current shape with the vertical and overhanging wall is attributed to the collapse of a large part of the roof after the earthquakes of 1953, which represents the natural vertical oval-shaped entrance of the cave, measuring 15x25m. (Figure 1&2).

Inside the cave, 20m below the ground surface and under the natural entrance there is a lake measuring 60x40 with a depth ranging from 10 to 35m. The total length of the accessible part of the cave is 160 m. Almost the entire area of ​​the cave is covered by water with the exception of a 30 meters long islet, created by a debris dome that derived from the collapse of the roof (Figure 3). This islet divides the cave into two chambers starting just before the entrance of the cavernous part of the cave with a ceiling height of 18 m. A narrow channel parallel to the islet connects the first lake to a second one, which constitutes the second part of the cave (Figure 4).

The walls of the cave are ornamented by amazing stalactites (Figure 5) which have abnormal growth, this phenomenon due to the air currents that develop inside the cave combined with the relative movement of limestone blocks. Stalactite ages range from 16,400 +/- 300 to 20,400 +/- 500 years.

Underwater exploration indicated that at the southernmost part the cave continues as a 240 m long siphon, where in the first 180 m there are two chambers, 27 to 33 m long respectively, having 1 m exposed to air. In this part of the cave there are a few stalactites. After the first 180 m, the roof gradually gets lower and at 200 m from the entrance of the siphon there is only a small and narrow passage measuring 6x3m. This siphon has many stalactites and ends up in an inaccessible crevice due to collapses. However, there are indications that the cave is communicating with the rest of the area's karstic network. In addition, under the artificial entrance, at the point where visitors board the boats at -20 m, a second siphon of smaller dimensions begins. It is a small tunnel measuring 1.50x0.80 m which is probably closed by rock falls. The water of the lake consists of fresh and sea water in a 5:1 ratio (Figure 6). The visitors approach the cenote through a 70 m long artificial downhill tunnel that gets to a small pier, from where the tour to the accessible part of the cave takes place by boat.

The vegetation around Melissani Cave is of the typical Mediterranean maquis type, with evergreen, broad-leaved shrub, which, wherever present in Cephalonia, forms an exquisite landscape of high aesthetic value. Characteristic species, among many others, are the Kermes Oak (Quercus coccifera), the Mastic (Pistacia lentiscus) and the Carob (Ceratonia siliqua). In spring, one can encounter several orchids, such as Serapias bergonii. Moreover, the humid and shady conditions around the cave lake favourthe occurrence of ferns, such as the Southern Polypody Polypodium cambricum. Regarding the fauna, the visitor will easily notice the Rock Pigeons (Columba livia) that nest on the walls of the cave and are present on the small island in the middle of the lake, or even be lucky enough to encounter rare visitors, such as the Eurasian Bittern (Botaurus stellaris) an Endangered bird species for Greece. Moreover, in the water, some may be able to observe a few European Eels (Anguilla anguilla) that live in the dense underground water network of the island and can be seen where the water reaches the surface, like here in Melissani or in Karavomilos, also elsewhere. Τhe European Eel is globally evaluated as Critically Endangered (CR), according to the IUCN.