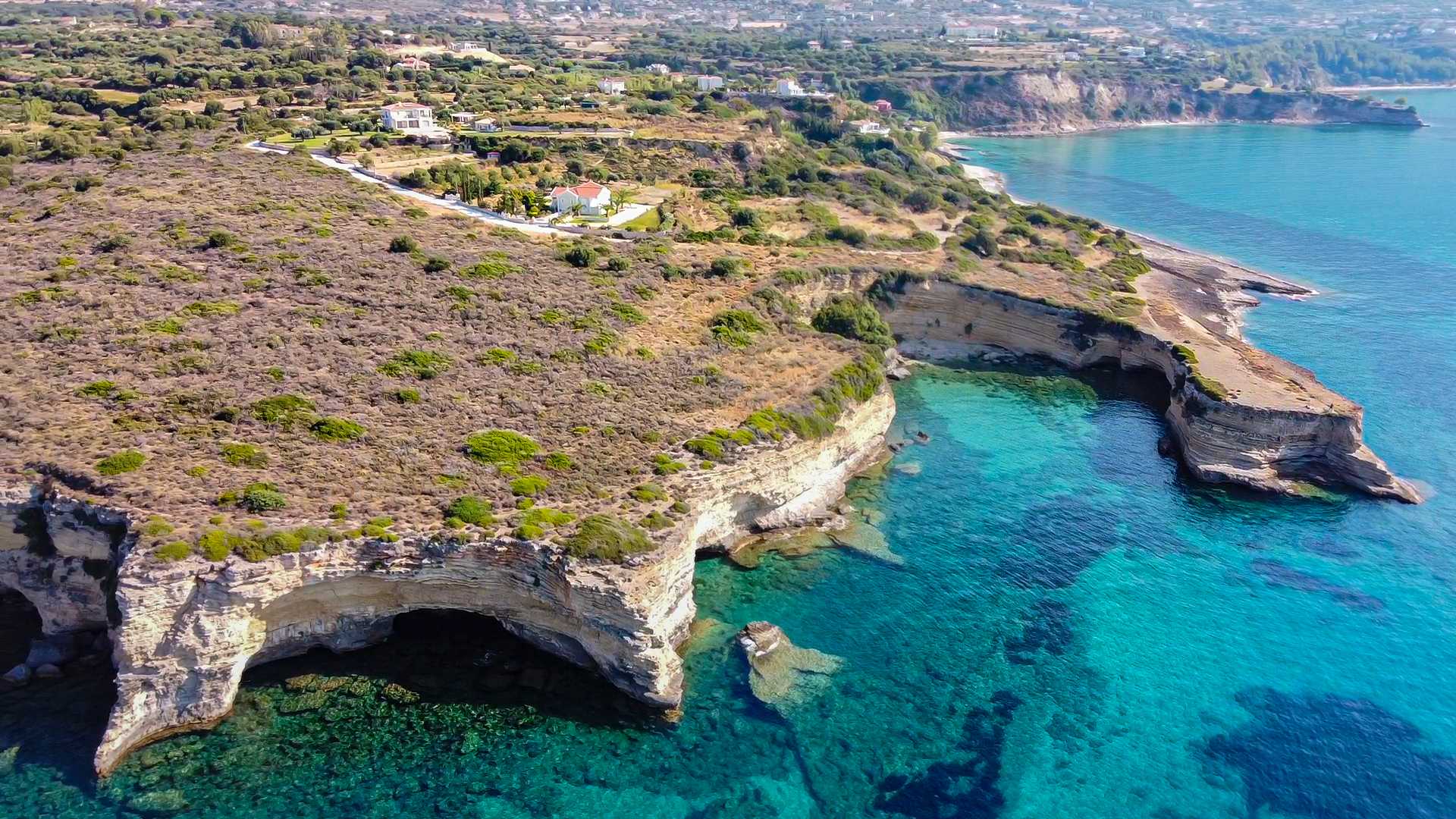 Agios Thomas Beach is located in the southern part of Kefalonia, close to Karavados village, 12 km distant from the town of Argostoli. It took its name from the homonymus church that was built at the top of the hill. This is a Geosite of special geological, paleontological, aesthetic and mythological interest. The area is dominated by the rock called Geronitsia (pieces of the elders) where a legend wants the elders to be thrown from the top so that they would stop to be an obstacle in life.

Agios Thomas Beach consists of post Alpine orogeny formations of Pliocene age (5.33-2.58 My), which in the lower parts of the section occur as alternations of sand-diagenetic sandstones, sandy limestones and thin marly layers. Gradually, towards the upper parts, blue marls prevail containing a rich mollusk fauna, while finally, in the upper part of the sequence, alternations of fine-grained sandstones and sandy marl layers develop again.

In the strongly diagenetic sandy limestones karstic geomorphs are found, such as small karstic pits and linear karren features. In these small natural cavities (salt pans) salt was collected. During summer months, they are filled with sea water which after evaporation, each time leaves a crust of brine on the surface. This crust, which in Kefalonia is called "afrala", was collected by the locals and is essentially the so called "Flower of salt" (Figure 1).

The sedimentological and palaeontological characteristics of this beach indicate marine terraces. Marine terraces are usually created due to the diagenesis of the sands, found in the coastal zone and due to the sea level change, where for these reasons they were elevated above sea level. In other words, they present the old level of the coastline, and they indicate where sea level was found in the past. This sudden change in sea level also creates fossilized horizons, rich in Pectinidae (scallops) (Figure 2) and Ostreidae (oysters) (Figure 3). These fossils are marine organisms that belong to Bivalve Mollusks. The Ostreidae attach with the left valve on solid substrates and form entire colonies (benches) in the shallow waters of successively welded shells. These colonies record coastlines and old coasts. In addition, we have the presence of Echinidae (Echinoids) (Figure 4) which are exclusively marine organisms, living at all depths, but are mainly abound in clear and shallow waters.

The beach of Agios Thomas is an excellent place to observe a deltaic system. Specifically in this site two deltaic systems (Figure 5) of Pliocene age (5.33-2.58My) can be distinguished, progradating towards the sea and developing in between coastal deposits. It is a typical deltaic platform (topset) developed in the old coastal zone, which passes laterally and towards the foreset, where the sea gradually became deeper and finally passes to the bottom set in the deepest parts of the seabed, forming all together a nice sigmoidal geometry. The study of the delta evolution based on the orientation of the dip of the estuarine deposits (foreset) indicates that deltaic deposits were produced from Mount of Aenos. In the neighboring areas, such as the beach of Spartia, it is clear that the estuaries of the rivers (foreset) pass laterally to deeper places of the delta (bottomset) (Figure 6). It has been observed that the developed deltaic systems are increasing in number approaching towards the large faults near Aenos, as the basin gradually is restricted close to the mountain.

The vegetation of the area consists of common reeds (Phragmites australis), sedges (Scirpus holoschoenus) and ferns (Adiantum capillus - veneris) along the shoreline that imply the existence of a freshwater source. Along the same shoreline, plants, such as Limoniun spp., sea fennels (Crithmum maritimum) and clematis (Clematis flammula) are also abundant.