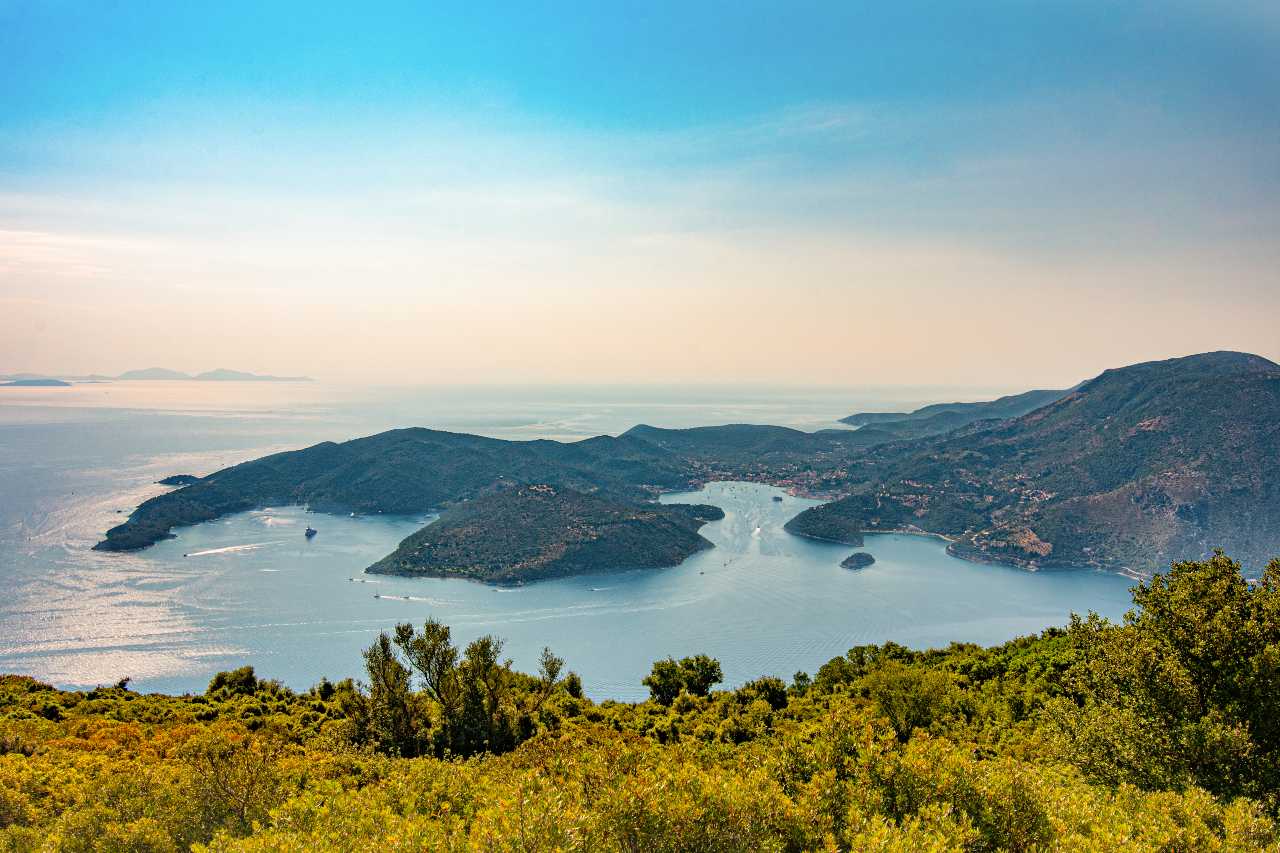 On the road to Anogi village in Northern Ithaca, there is an excellent spot with a unique view towards the southern part of the island and the eastern side of Molos gulf, which divides Ithaca in two parts. Looking in a SW-NE direction one can observe the bay of Dexa, Skinos and the port of Vathi, while at the same time we can see the beach Gidaki which is located east of the gulf. (Figure 1).

On the road to Vathi there is the crossroads for the Holy Monastery of Panagia Kathara (or Iera Moni Katharon), which is mentioned for the first time in 1696 (Figure 2&3). The name of the Monastery was given after the place where the icon was found and thus the monastery was built, since "clean" (in the local dialect) are the dry branches from which it is believed that it was pulled out. Another theory, however, correlates the name of the Monastery with a succession of worship in the same place, where the existence of the pre-Christian temple of Athena the "Pure" (ie, Virgo) is probable.

It is also an equally excellent view point in which on one side we can see almost the entire southern part of the island and on the other the island of Kefalonia.

The gulf of Molos consists of almost the entire series of the lithological sequence of the Ionian zone as it appears on the island of Ithaca. Specifically, the bay of Dexa and the bay of Skinos consist of the Upper Triassic (237-201.3 My) - Middle Liasi age (190.8-182.7 My) "Pantocrator Limestones". The same applies in Vathi with the difference that it has been covered by Plioquaternary deposits which consist of more recent loose sediments (lateral alluvium and lateral screes). Respectively, from the bay of Dexas to the bay of Front Aetos occur Triassic (237-201.3 My) to Eocene (56-33.9 My) limestones as well as flysch of Oligocene-Middle Miocene age (33.9-13.82My). Finally, Gidaki beach consists of Jurassic-Cretaceous (201-100.5 My) limestones.

The intense geomorphology of the Gulf of Molos is mainly due to the eustatic movements that took place during the Quaternary (the last 2.5 My). Specifically, during the Quaternary, successive alternations of cold and warm periods (glacial and interglacial periods respectively) are observed. During glacial periods a large amount of ocean water accumulates and binds in the form of ice on the land surface, causing the drop of the sea level (up to -140m).

Conversely, during the interglacial periods, which are characterized by an increase in temperature, the ice melts, resulting in a large amount of water returning from land to sea, thus raising its level. The result of these eustatic movements is the intense deep erosion by the action of the water during the glacial periods, which forms this characteristic landscape, valleys of the "fjord" type, and which with the rise of sea level during the interglacial periods got flooded forming long and narrow bays as in this case the bays of the gulf of Molos, as well as the gulf itself too (Figure 4).

Very little is known on the biodiversity of the area. Regarding the fauna, the Ionian Wall Lizard (Podarcis ionicus), a Balkan endemic species, and the Kotschy’s Bent-toed Gecko (Mediodactylus kotschyi) have been recorded.