Geosite No 41. Monoliths (Menhir) of Anogi 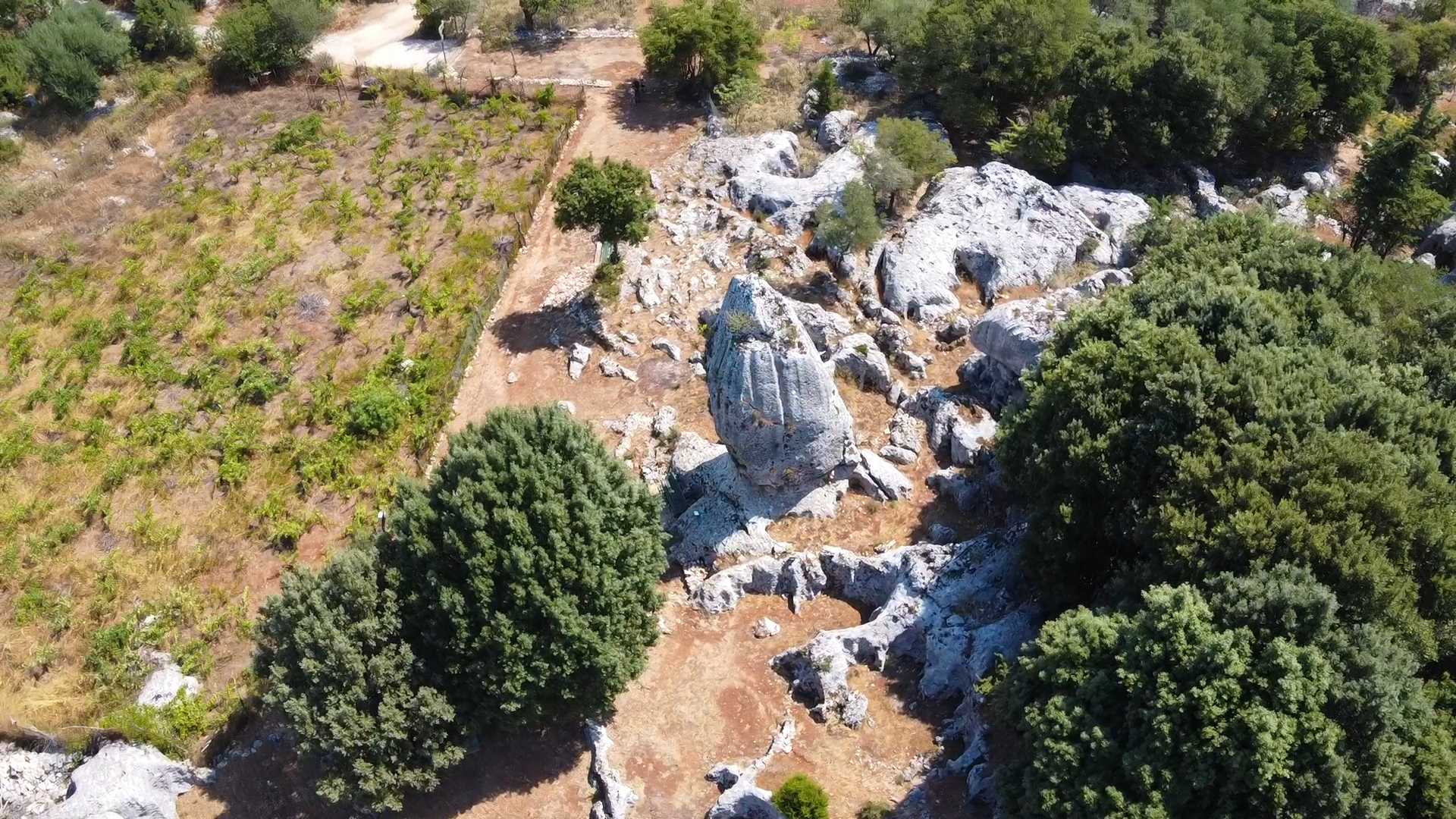 The impressive monoliths also called “menhir” (in the Brettonic language, men = stone + hir = long) of Anogi constitute impressive isolated boulders of Upper Cretaceous (100.5-66.0My) limestones of the Ionian zone. They are scattered around the wider area of Anogi, the most mountainous village of Ithaca built at 550 meters of altitude on Mt Niritos, which is the highest mountain of the island. The “menhir” of Anogi are one of the most important attractions of the island. They have been incorrectly considered as prehistoric megalithic monuments; however their origin is purely geological and not anthropogenic (from rock or stone carving). Their striking shape, however, attracted the interest of the locals who have given names to the boulders based on their shape. Thus, the largest and most impressive boulder has been named "Araklis" (alliteration of "Hercules") (Figure 1) dedicated to the ancient hero. It has a spindle shape, and is located 600m east of the village standing at a height of 9m, while a total of about twelve smaller monoliths of various shapes and sizes have been found in the area (Cobra, Dolphins, Tulip, Odysseus' palm of the hand, Sheikh, Hippocampus, Turtles, Whirligig and Mushrooms).

Another menhir of significant size, apart from Araklis, is the menhir of Kavelaris (alliteration of the name "καβαλάρης (kavalaris)"=rider) due to its characteristic shape reminiscent of an equestrian man. Also, in a short distance from the village square we find "Kourkoula", while at the entrance of the village, next to the road to Vathi, "Psilo Lithari" (Figure 2) it is found. At this site the Threshing floors of Anogi also dominate the landscape (Figure 3).

The particular relief of the plateau of Anogi and Mount Niritos, combined with the numerous scattered monoliths, constitute an impressive rocky landscape. The main factor for the formation of this relief is the dissolution of limestone rocks by water (karstification). The “menhir” of Anogi in particular, are the insoluble remnants of limestone, which are mainly elongated, smooth, carved and some of them are placed upright (Figure 4).

On the “menhir” of Anogi, and in the whole area in general, karstic geomorphs such as erosive grooves (channel) and "Karren" can be seen, and which have been formed by the dissolving action of water. They look like small channels, and they look like traces of fingers that were pulled or dragged on the limestone when it was still in a plastic state. They are formed on inclined layers, by the flow of water on the surface of the limestone. Their dimensions are generally small. We also observe other erosive forms such as large rounded cavities of various shapes that have the form of small wells the so-called "pots".

Relatively little is known on the biodiversity of the area. Fauna includes several lizard species which commonly occur in this area; the Balkan Green Lizard (Lacerta trilineata), which is one of the largest legged lizards in Europe with a total length that can reach or exceed 50 cm, the Ionian Wall Lizard (Podarcis ionicus) endemic species to a Balkans and the Kotschy’s Bent-toed Gecko (Mediodactylus kotschyi). Moreover, two horseshoe bat species have been recorded here, i.e. the Greater and the Lesser Horseshoe bats Rhinolophus ferrumequinum and Rh. hipposideros, respectively.