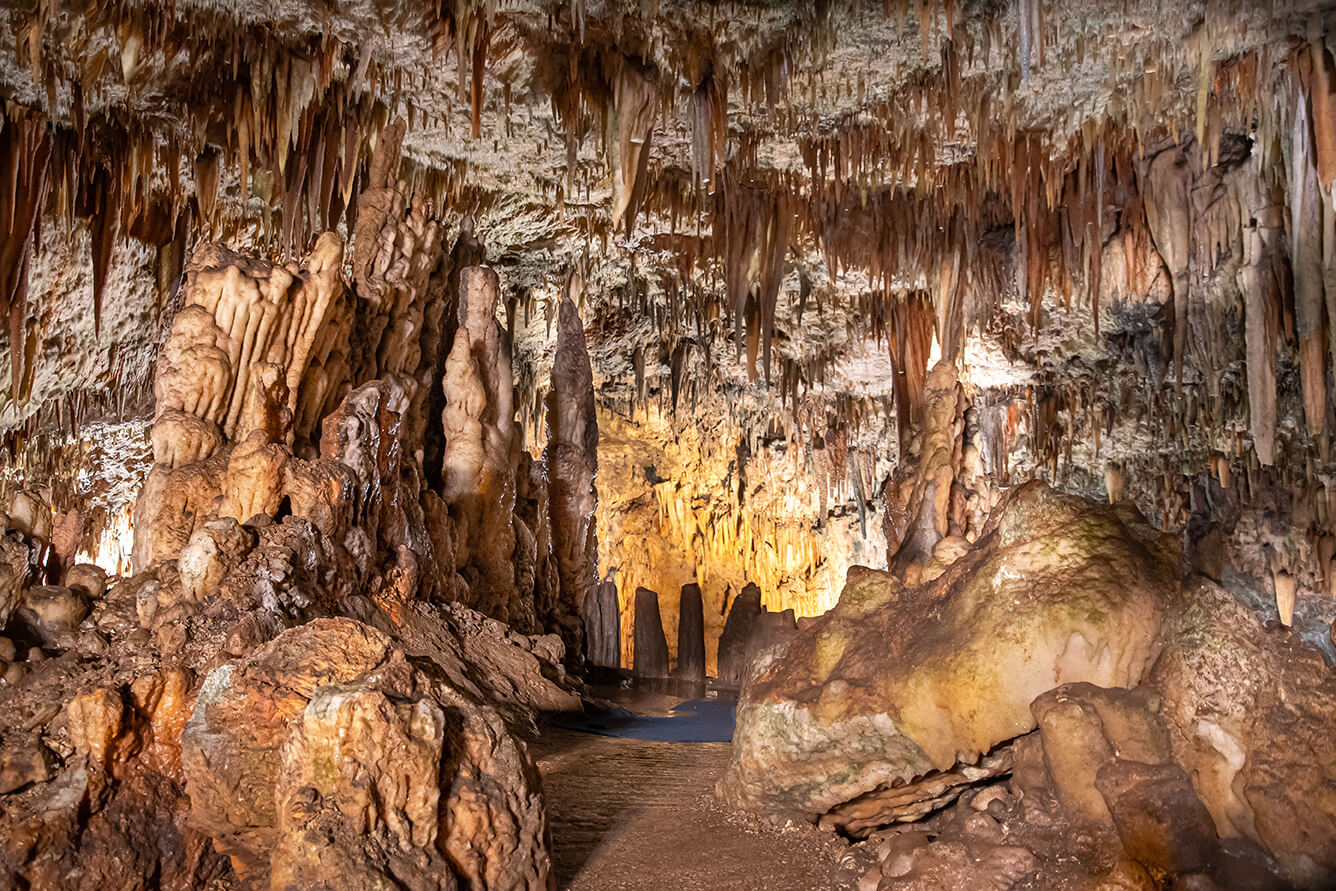 Drogarati cave is one of the most important caves of Kefalonia, if not the most important, and the richest in speleothems. For this reason it is considered as one of the most beautiful limestone caves in Greece. It is located at an altitude of 120 m in the area of Haliotata, 5 km from Sami. It was discovered after a strong earthquake shattered part of its ceiling, exposing its present entrance. It started operating as a tourist cave in 1963.

The cave develops in Paleogene (Paleocene-Eocene 65.5-33.9 My) limestones (Figure 1). The shape, the evolution, and the orientation of the cave are determined by the intense tectonic movements that occur in the area, due to its position near the front of a large fault (The thrust of the rocks of the Ionian zone on those of the Pre-Apulian zone). These tectonic movements are recorded in the carbonate rocks of the region as faults and joints (fractures). The cave owes its creation and its development to these “fractures”.  Joint measurements that have been made in the cave indicate that the orientation of the cave development follows the orientation developing of the main faults that occur in the area which is NNW-SSE. The cave is 95 m deep and its ceiling height is 20 m. The temperature in the cave is 18oC and the humidity reaches 90%.

The Karst cavity is divided into two main parts. The first part was once an extension of the cave and due to the collapse of its ceiling, it has been turned into a small doline. This is testified by the huge stalagmites that are found in some parts of it. The eastern side of the doline has a slight slope and this is where steps have been built leading to the entrance of the main cave. The second and main part of the cave consists of a large chamber, 100 m long and is divided into two levels. The first level (higher) was formed by boulders detached from the ceiling. It is elevated and surrounded by tall stalagmites(Figure 7). The second level is a flat semicircular hall measuring 65x40 m and about 20 m high, resembling a large natural amphitheater where, due to its excellent acoustics, a variety of concerts and events are organized.

For this reason this central hall is called "Apotheosis Room" (Figure 7) and respectively the first level "Royal Balcony" as it has been arranged for VIP guests. The cave of Drogarati is an “active cave” which continues its development. Drops from stalagmites are observed everywhere. It is also characterized by rich speleothemes such as stalactites, straw stalactites, stalagmites, columns, curtains, helictites and gours that form small ponds. It has been also confirmed that the cave communicates with other caves or karstic cavities in the area such as the caves Aggalaki and Saint Theodoroi.

Therefore, it is connected to the wider karstic network of Sami. Concluding the rich speleothems of the cave consist of the following:

Stalactite: Cylindrical or conical deposit of minerals, generally calcite (CaCO3), which are formed by water drops dripping from the ceiling of a cave through joints. Generally they have a hollow tube at its center. A stalactite grows about one centimeter every one hundred years. From Greek word meaning exude drops(Figure 4&5).

Straw stalactites: Thin tubular stalactites, generally less than a centimeter in diameter and of very great length; also called soda straws. Usually they develop along the joint system of the cave (Figure 6).

Stalagmite: A deposit of calcium carbonate (CaCO3) rising from the floor of a limestone cave, formed by precipitation from a bicarbonate solution through loss of CO2. The water drops on the stalagmite from above. They are usually found opposite stalactites. From Greek word meaning drip.

Column: A flowstone formation, generally cylindrical, formed by the union of a stalactite and a stalagmite(Figure 7).

Helictite: Speleothems which develop on a curved or angular twig like lateral projection of calcium carbonate (CaCO3) having a tiny central canal, found in caves(Figure 9).

The vegetation round the cave is a typical rich maquis of high aesthetic value, with arboreal species, such as the mastic tree (Pistacia lentiscus), the Kermes Oak (Quercus coccifera), the Cypress (Cupressus sempervirens), etc, as well as shrubs, such as Spartium junceum or the Bramble (Rubus spp.). Moreover, ferns have been recorded here (Asplenium scolopendrium subsp. scolopendrium) and several herbaceous plant species. Among them, one should note the occurrence of a beautiful bellflower, endemic of the Ionian Islands (Campanula garganica subsp. cephallenica). Regarding the fauna of the cave, very important, mainly troglophile invertebrates, have been recorded. For example, the cave cricket Dolichopoda pavesii endemic of Drogarati and Drakopsilia Avythou caves, (Vulnerable according to IUCN), the ground beetle Speluncarius henroti, endemic of Drogarati and Aggalaki caves (it was discovered here!), the pseudoscorpion Roncus pieperi, endemic of Drogarati and Fytidi caves etc. Today, the conservation status of such species in the cave needs to be reassessed, given the intense touristic exploitation of the cave. Besides, because of it, the presence of bat species in the cave has largely diminished, since in the latest survey, only the Lesser Horseshoe bat, Rhinolophus hipposideros, was recorded.