Geosite No 20. Gorge of Poros 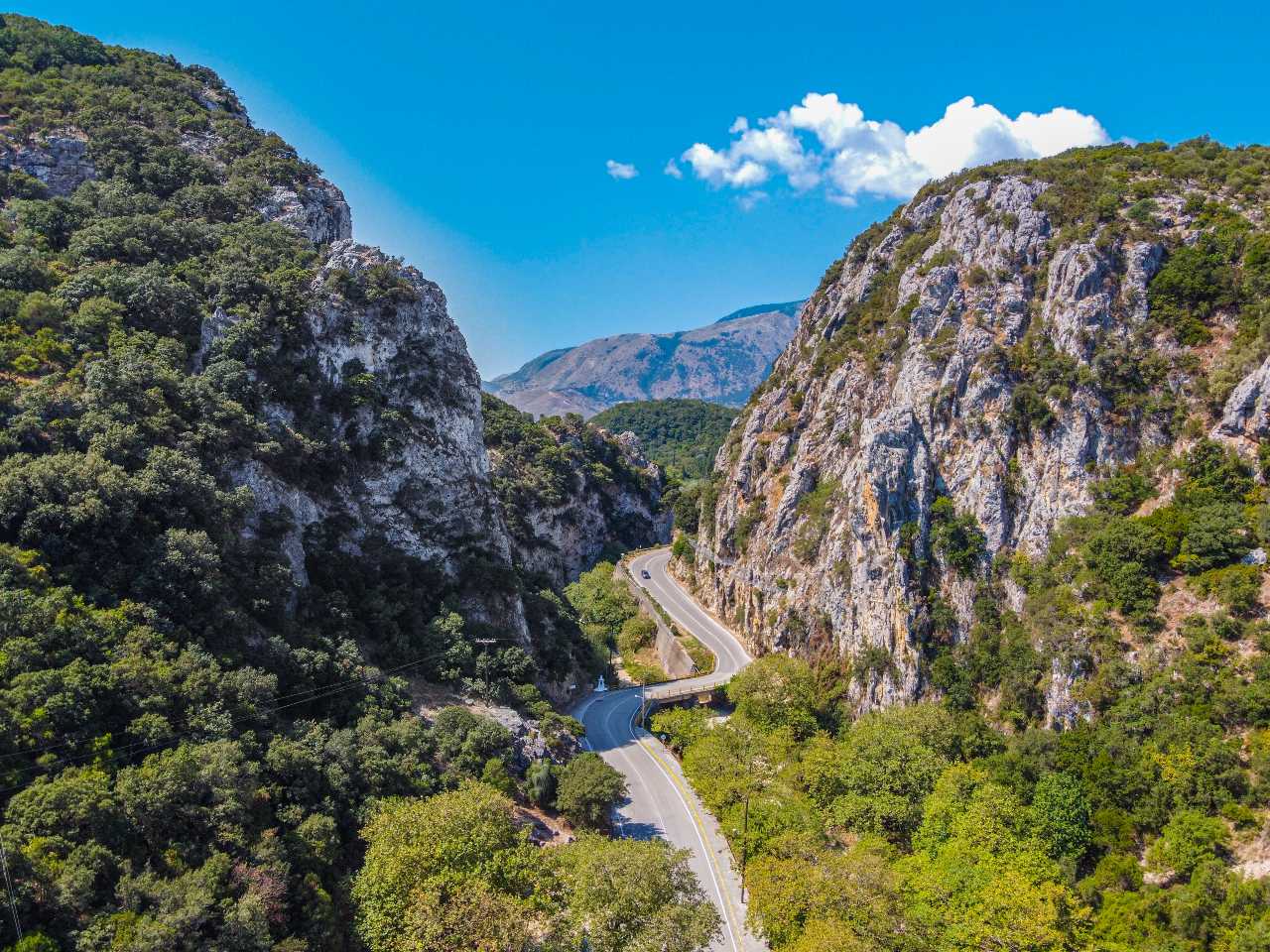 The gorge of Poros is one of the most beautiful geomorphological phenomena of Kefalonia. It is located in the southeastern part of the island, on the border of the settlement of Poros (Figure 1), near the port, and is 45km far from Argostoli. It is a gorge of significant size with geological, aesthetic, archaeological and religious interest. Also in the area several endemic plants are found. The river Vohynas passes through the gorge of Poros, which flows out from lake Avithos , and moves towards the sea while in the summer it dries up.

The Poros gorge is closely connected with the myths of the area that either refer to the presence of the demigod Hercules or to the presence of a Dragon. More specifically, at the ridges of the gorge (which connected the midland ancient city of Pronnoi with its port, modern Poros), mythology presents Hercules having left signs of his footprints, thus shaping the relief of the area, which ends in the valley of Pronnoi with the corresponding local name "Arakli", produced by "Iraklis (Hercules)". A variation of this legend has the relief of the gorge being "marked" by the traces of a dragon’s and not the hero’s footprints, which was believed to reside in the gorge, hence the name " Dracaena" was preserved by locals in a cave located in the gorge. It is interesting that, even though there are other prehistoric sites in the gorge, this cave preserves Neolithic artefacts as well as elements of habitation and a variety of organic remains. From these findings, it seems that during prehistorical times, the cave was a place where ritual gatherings were held, probably related to hunting, while during the historical years it was used for the worship of Pan, the nymphs and Zeus of Aenos Mountain. In the cave of Drakaina, the presence of other cultivated plant species (wheat, barley, legumes, grapes, fruit trees, etc.) was identified along with bones of domestic animals, marking the existence of agriculture and livestock breeding from the 6th century BC. Moreover, trade with other areas of Greece is also evident through the presence of objects in the cave from materials that could not be found on the island, such as tools from opsidian from the island of Milos and marble from the island of Naxos. Finally, in the cave of Drakaina, the earliest presence of the olive tree on the island was identified, while of great archaeological interest is the discovery of a tiny plant weaving fiber!

The gorge of Poros constitutes a karstic feature of a narrow and deep gorge with steep, almost vertical rocky walls, of great height. It was formed in the massive and white Upper Triassic-Middle Lias (237-182.7 My) limestones of the "Pantocrator" formation, of the Ionian zone(Figure 3).

The orientation of the Gorge development is NE-SW, its length is about 500m and its maximum height is about 80m, thus creating an imposing landscape. The formation of the gorge of Poros was primarily due to the lithology of the area, which consists of carbonate rocks (limestones of the Pantocrator formation), the erosive action of water currents associated with the eustatic movements that took place during the Quaternary (the last 2, 5 My) when the sea level dropped down to -140m during glacial periods, as well as in intense tectonics.

Tectonically the area is mainly affected by the most important tectonic event on the island of Kefalonia, the Ionia thrust, with a general NNW-SSE orientation, which took place during the Pliocene (5.33-2.58 My). Specifically in the area of Poros there is a small rift valley with an axis vertical to the axis of the large rift valley of Pronni. This rift, occurred due to the intense erosive action of the waters, and due to the heavy rainfall that prevails on the island, developed into the gorge we see today. 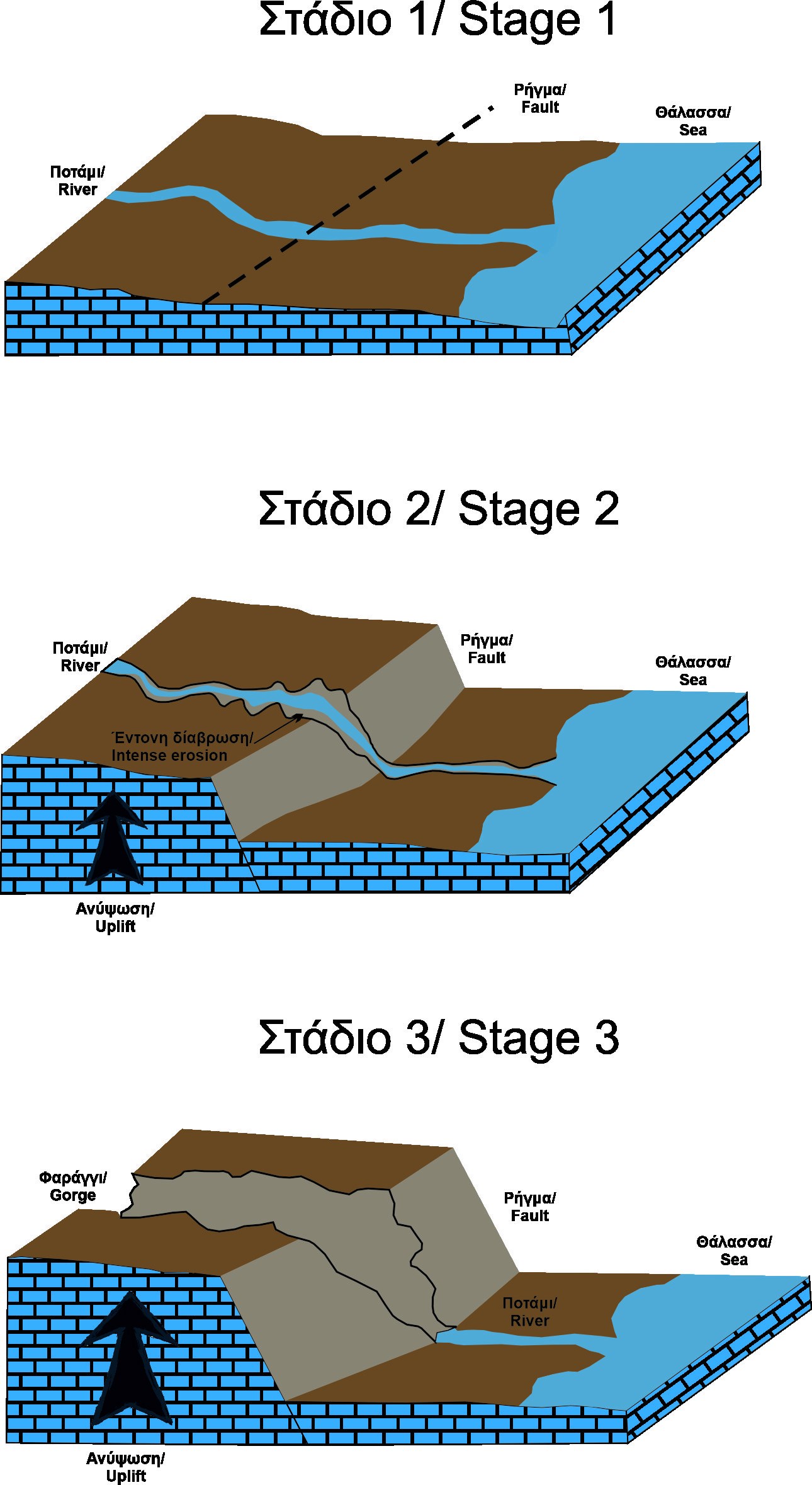 Regarding the flora of the area, it should be noted that the available soil for plant development on the vertical cliffs of the gorge is minimal and restricted to rock crevices. The only plants that can survive in such micro-environments are chasmophytes. The most emblematic plant here is Silene cephallenia subsp. cephallenia, endemic of the gorge, i.e. it exists nowhere else in the world but here! It is a perennial herb, 20-40 cm tall that produces small flowers, observed during June-July. Other species that grow here are Campanula versicolor, Ephedra campylopoda, Galium sp., Micromeria juliana, Ptilostemon chamaepeuce, Putoria calabrica etc. Moreover, the steep cliffs favour the presence of several birds species. In particular, more than 23 bird species have been recorded. Among them passerines, gulls, and birds of prey, such as the European Honey-buzzard (Pernis apivorus) and the Common Kestrel (Falco tinnunculus). It should be noted that in the past Audouin’s Gull (Larus audouinii) and the Lesser Gray Shrike (Lanius minor) had been recorded in the gorge, the former considered Vulnerable and the latter Near Threatened for Greece.