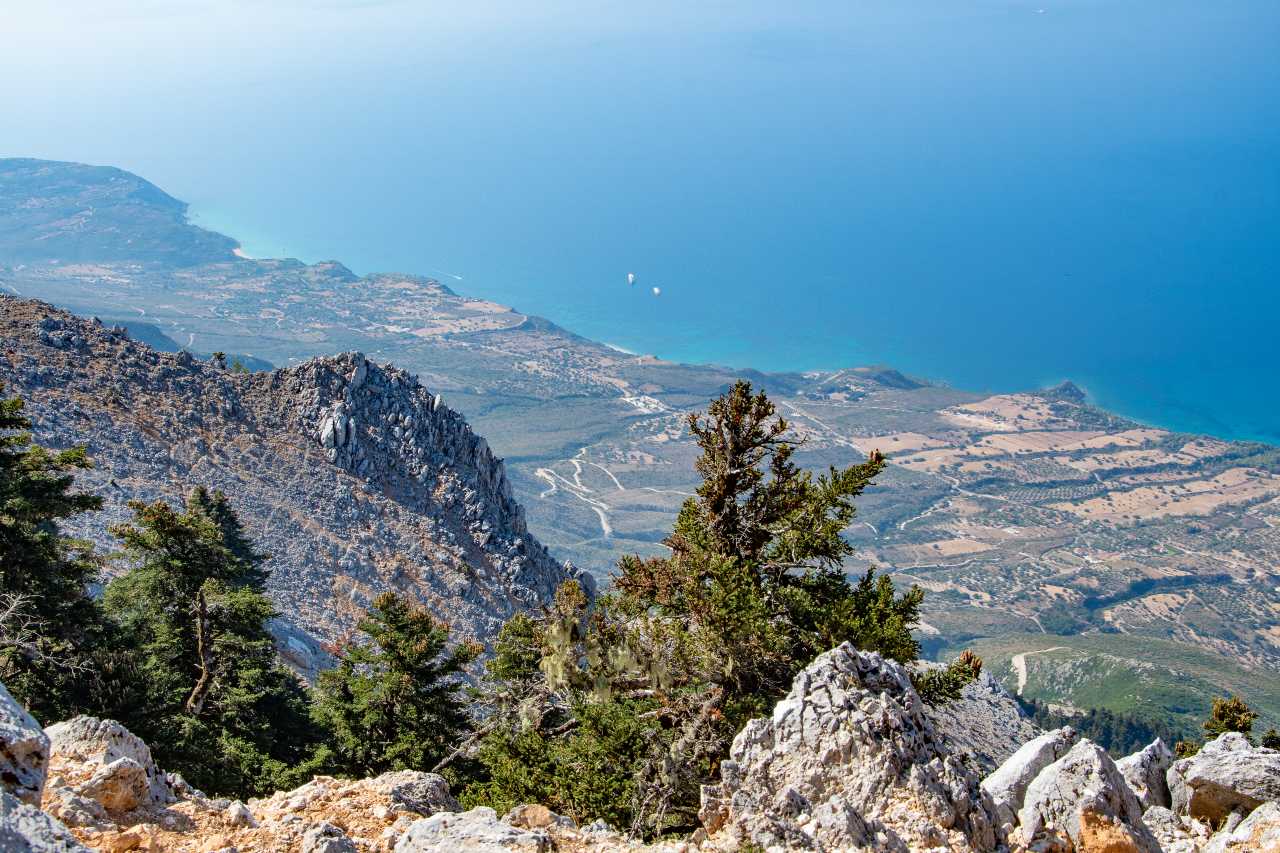 Aenos mountain range (Figure 1) located between Argostoli and Sami, constitutes the main mountain mass of Kefalonia and the highest in the Ionian islands. Its highest peak is Megas Soros (1627 m) followed by Stavros (1532 m), Kroukoumbias (1508 m), Vounos (1312 m), Vigla (1050 m), Kefali Petri (1025 m), etc. Mount Aenos is a natural monument which attracts the interest of both tourists and ecologists and has been declared as a National Park since 1962.

The National Park has a total core area of ​​28,620 acres, 2/3 of which are covered by the endemic Kefalonian Fir tree (Abies cephalonica Loudon) (Figure 2). Several animal species, such as the semi-feral horse population, find refuge in the National Park. It has also been registered in the list of areas of the European Ecological Network of Special Zones "NATURA 2000" and in the network of special protection Areas of the European community for the protection of avifauna. With its declaration as a National Park, it was also designated as a Wildlife Refuge. Finally, Aenos National Park has five hiking trails (paths) from easy to moderate level of difficulty and a total length of about 26 km.

Mount Aenos is believed to have taken its name from the ancient Greek word Aenos (= hymn), due to the worship activity in honor of Aenisius Zeus that took place in a sanctuary on the mountain. In addition, Aenos was an important natural and economic resource for the Kefalinians, as from antiquity to modern history it has been a source of wealth and prosperity through the continuous supply of the island in timber from the exploitation of the Kefalonian fir. An interesting myth that accompanies mount Aenos, concerns the existence of a huge, winged dragon on the mountain, as noted in an official state document of 1509, which offers an area of ​​forest to anyone who managed to kill the man-eating beast!

The mountain range Aenos - Roudi - Agia Dynati is the dominant geomorphological feature of the island. It constitutes a part of the Greek mountain ranges, which were formed during the various phases of the Alpine orogeny of the Meso- Tethys sediments. The Aenos anticline with an NW-SE development orientation and a ridge length of 11 km is the result of the effect of a series of successive tectonic deformations, mainly of a compressive nature (reverse faults), which have been interrupted by periods of rock decompression (normal faults). The main tectonic forms that were formed during the phase of its alpine deformation, are mainly related to the placement of the Ionian thrust sheet on the Pre-Apulia during the Lower Pliocene (5.333 million years). One of these old faults with which Aenos emerged, is the Aenos reverse fault. This is followed by a period of decompression with normal faults corresponding to the Upper Pleistocene - Lower Pleistocene (3.500-0.781 million years) (Figure 5). Aenos belongs to the Pre-Apulia zone where Upper Cretaceous (100.5-66.00 million years) thin-bedded to thick-bedded limestones predominate from which consists of the main part of the island. Furthermore, Lower Cretaceous (145.0-100.5 million years) dolomites prevail in the lower parts of the southwestern slopes of Aenos (from Simotata to Markopoulo). Aenos contains various fossils of marine organisms such as: Foraminifers, Rudists, Gastropods, Bivalves, Sponges, Bryozoans, Echinoderms and Cephalopods (Ammonites). The most characteristic fossils of Aenos are: Rudists (Rudistacea) which include the groups of Hippuritidae and Radiolitidae. Due to the lithological composition and the intense tectonics that prevail, it results in the creation of various "karst" geomorphs, such as sinkholes and caves (Cave of Nimfi, Petasi Cave). The characteristic of the area is the lack of karstic springs. The only spring, located in the area of Zoodochos Pigi Monastery is found above the settlement of Arginia, on the southeastern slopes of Aenos. In this view point, the intense geomorphology of the mountain (anticline) is easily observable, as well as the view of the southern part of Kefalonia island, which consists mainly of post- Alpine deposits (Figure 2, 3 & 4).

Aenos National Park with its remarkable biodiversity constitutes, undoubtedly, the most important and well-studied protected area of Kefalonia Island. Looking around, one is easily convinced that the dominant feature of the area is the dense forest of the Kefalonian Fir (Abies cephalonica). In fact, this species was first described in 1832 at Kefalonia and is endemic to Greece. In the National Park, ca. 450 plant taxa have been described, among which two are stenotopic endemic taxa thriving at the highest altitudes of the National Park, i.e. the Kefalonian Violet (Viola cephalonica) and the Kefalonian Skullcap (Scutellaria rupestris sub sp. cephalonica). The former has its most important sub-population in the nearby fenced antennae area, whereas the latter also grows on the road sides of the same area. Moreover, Ajuga orientalis subsp. aenesia is a Kefalonian endemic species, while many other taxa are rare/endemic plants of the Ionian region or of Greece. It should be noted that the National Park hosts a significant flora of orchids (ca. 25 taxa), some of which are Greek endemics. In addition, the mushroom diversity in the National Park is remarkable and some taxa constitute the first reports for Greece! Regarding fauna, the National Park supports a remarkable avifauna with over 100 species recorded so far, among which several birds of prey and a large number of passerine species. In fact, Montagu’s Harrier (Circus pygargus) is considered a Critically Endangered species in Greece, the Lanner Falcon (Falco biarmicus) and the Golden Eagle (Aquila chrysaetos) are Endangered species and the Long-legged Buzzard (Buteo rufinus) is Vulnerable. The Short-toed Snake-Eagle (Circaetus gallicus), the Eurasian Skylark (Alauda arvensis) and the Lesser Grey Shrike (Lanius minor) are Near Threatened. An important element of the avifauna is also the Rock Partridge (Alectoris graeca), a Vulnerable species in Greece occupying the tall summits and steep slopes of Mt. Aenos, so that this area makes part of its habitat. Fourteen species of reptiles have also been recorded in the National park, such as the Greek Algyroides (Algyroides moreoticus), a Greek endemic lizard frequently found at shady places of the Fir forest, etc. Regarding mammals, perhaps the most bizarre-looking animal is the mole (Talpa stankovici), an underground-living species; among the Greek islands it occurs only on Mt. Aenos and Corfu.