Geosite No 12. Gorge of Agia Varvara 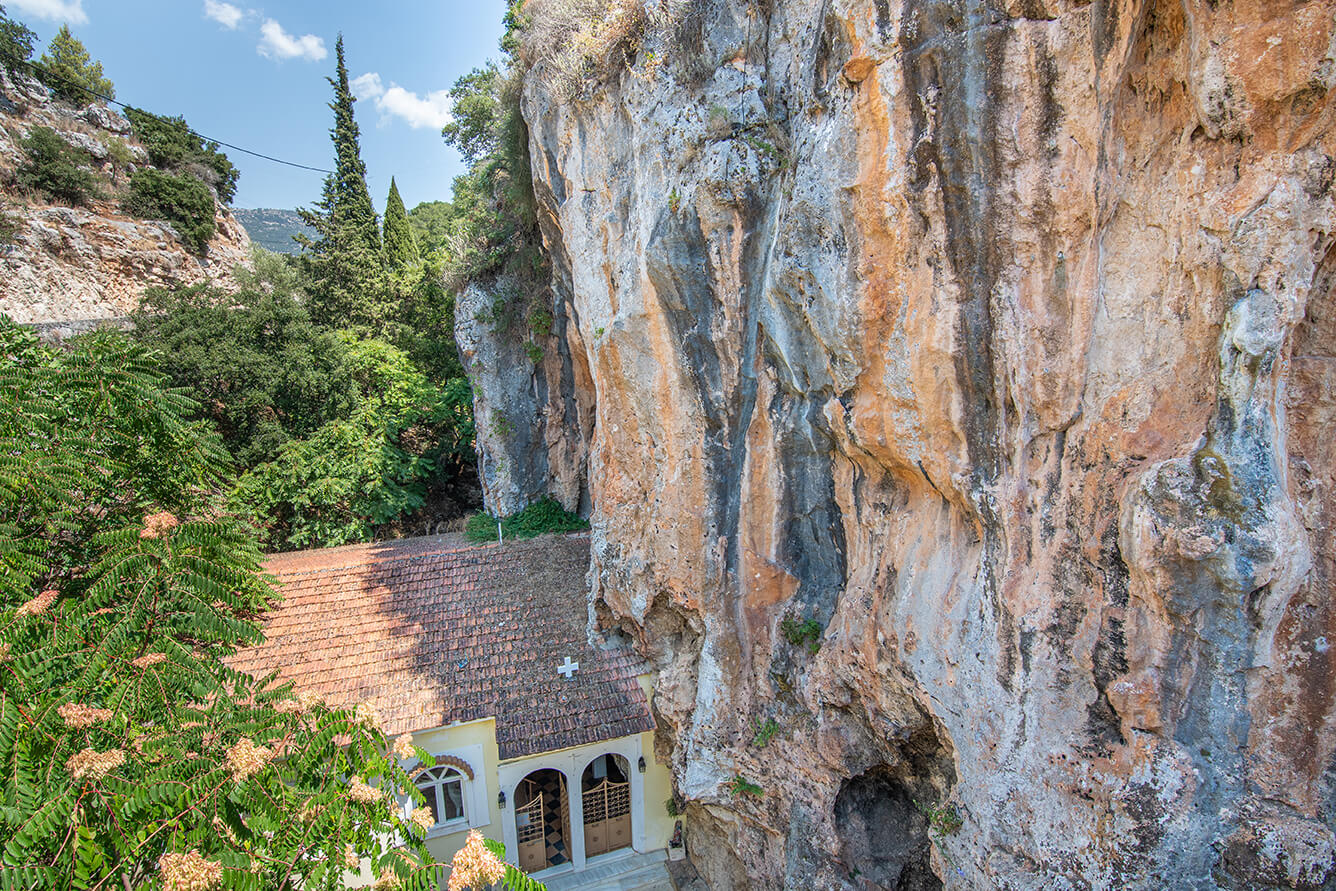 The gorge of Agia Varvara is located eastward of the city of Argostoli, on the eastern side of Koutavos lagoon. At a distance of 300 meters from the shore, we come across the gorge and visit the homonymous church (Figure 1). This is a relatively small gorge which presents geological, aesthetic and religious interest.

The church of Agia Varvara was built in the cave which is located at the bottom of the gorge when, according to tradition; the locals discovered the icon of the Saint in the cavity. The icon is considered miraculous and for this reason, every year on the day that Agia Varvara is celebrated (4 Dec.), the locals practice the custom of "seedlings" (or sperna)," (gr. Εσπερινός, Eve of a celebration), offering boiled wheat in a knitted basket ("kanistri") to the Saint as an acknowledgment for her protection. The church of Agia Varvara (Figure 2) is framed by two stone arched bridges, one of which was built in 1824. These bridges are crossed by the pilgrims on foot on the eve and on the day of the celebration of Agia Varvara, on their way to the church of the rock, holding the "kanistria" with the "sperna". After the celebration, every believer strings 40 grains of boiled wheat from a thread, which will decorate the icon of the Saint until the following year.

The gorge of Agia Varvara is a surficial karstic landform of a narrow and deep gorge (or stream/valley) with steep, almost vertical rocky walls, of great height. It was formed in medium to thick bedded Upper Cretaceous (100.5-66.0 My) white limestones with a NE-SW orientation, while its length does not exceed 300 m. The formation of the gorge of Agia Varvara depended on the hardness of the limestones, the intense tectonism, the eustatic movements that took place during the Quaternary (the last 2.5 My) when the sea level dropped even up to -140m during the glacial periods, as well as in the intense and frequent rains that prevailed on the island of Kefalonia, especially during the winter months and the karstic and mechanical erosion they cause. Tectonically, the area is mainly affected by the Aenos thrust, which occurred during the Pliocene (5,33-2.58 My). Therefore, the erosive action of water and the existence of faults and fractures, through which the disintegration and then the erosion of the Upper Cretaceous limestones started, played a decisive role in the formation of the gorge as well as of the cave (Figure 3).

Aghia Varvara gorge presents significant botanical interest, since it hosts characteristic plants of the flora of the Ionian Islands. Among them, one can distinguish the Ionian endemics Allium ionicum and Stachys ionica, the Greek endemic Βellevalia hyacinthoides, but also Acis ionica, which is very interesting from a biogeographical point of view. Other plants that have been recorded in the area, some of which are truly spectacular when in blossom, are the following: Anemone pavonina, Anogramma leptophylla (fern), Bellevalia romana, Campanula versicolor, Iris unguicularis subsp. cretensis, Fedia cornucopiae, Ophrys fusca, Ptilostemon chamaepeuce, Theligonum cynocrambe, Vinca herbacea etc.