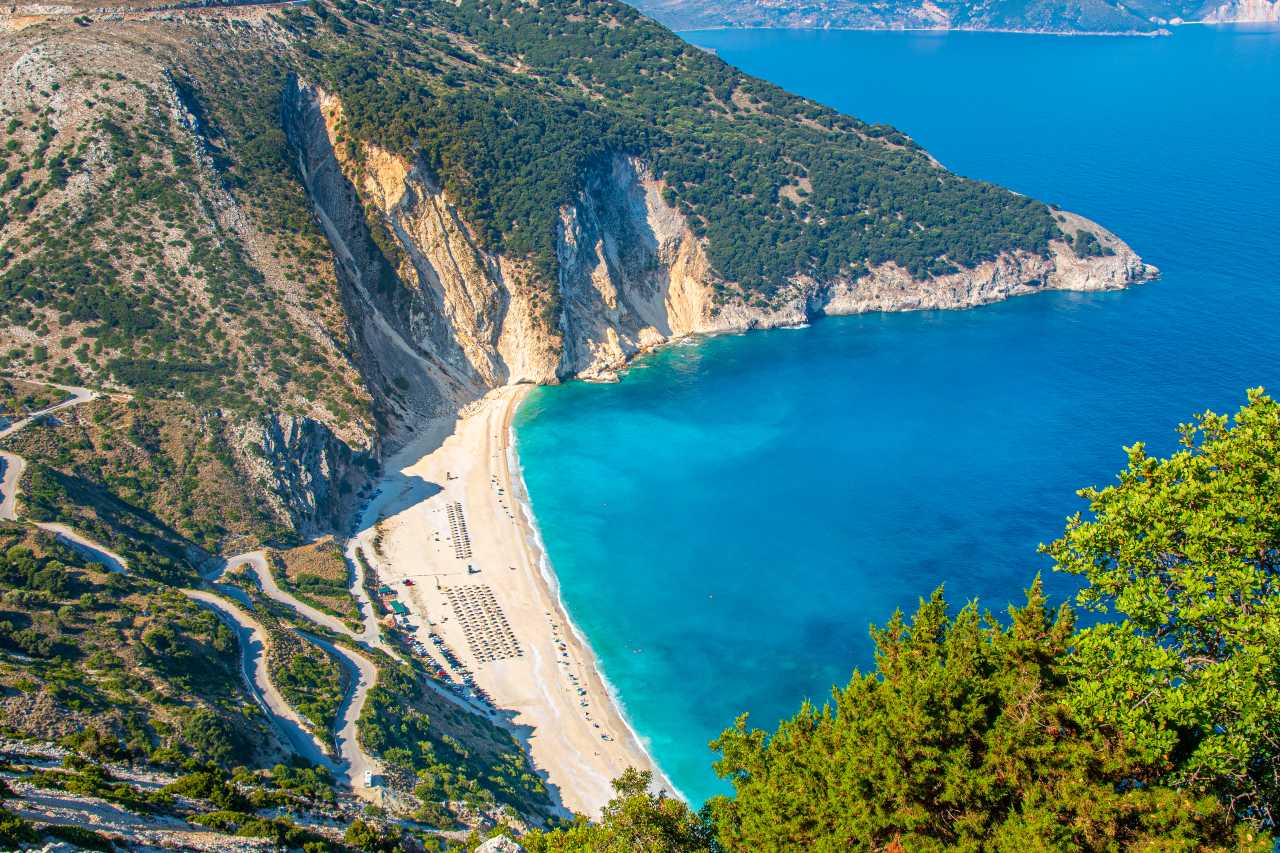 Myrtos bay is the most famous beach of Kefalonia and one of the main sightseeings, with the vertical slope surrounding a sandy beach about 800 m long (Figure 1&2). It is located in the northwestern part of the island and belongs in the region of Pylaros of the Municipality of Sami, which is situated between the northern part of Mount Aenos (Mount Agia Dynati) and the southern part of the Erissos peninsula (Mount Kalon). Apart from its special beauty, this region presents also a special geological interest due to its particular geomorphological features and its intense active tectonics.

Particularly, we observe the appearance of the older rocks over earlier ones (Figure 4). However, apart from the Agia Efimia fault there are also smaller strike slip faults of NE-SW and NW-SE orientation, which intersect Myrtos beach vertically creating a geotectonically very unstable area.

Therefore, the limestone rocks are strongly fragmented with large open cracks. In conjunction with the heavy rainfall and the intense tectonics; the rocks are prone to rock falls and landslides, while screes are also created at the base of the slope. These screes consist of sand, cobbles and breccia of limestone. On the south side of Myrtos beach there is a coastal cave which has one entrance from the land and one from the sea side. The earthquake of 2014 was an important event for the initiating landslides and rocks falls on Myrtos beach as well as along the road network in the area of ​​Charakas (or Harakas?).

The failures on the road network occur on Cretaceous (145.5-66.0My) to Late Miocene (23.03-13.65My) limestones of the Pre-Apulian zone causing damages at five points on the road network due to the fault zone (fracture zone) found in the area of Harakas. Although the destruction of the road, due to the intense tectonic activity in this area, caused road traveling problems but also allowed the opportunity between different cognitive objects to work together in order to build a road bridge over an active fault zone. The construction of the bridge constitutes an achievement of engineering because of the fact that the bridge (unique in Europe) is built on an active fault zone; in such a way that it is absolutely safe during an earthquake (Figure 6).

The flora of Myrtos is an impressive mosaic, composed of the species on the hills above the famous beach, such as junipers (Juniperus phoenicea), mastic trees (Pistacia lentiscus), fig trees (Ficus carica), thorny burnets (Sarcopoterium spinosum), bushes of Spartium  junceum etc., of chasmophytes on the vertical rocks, prominently, the Greek endemic Dianthus fruticosus subsp. occidentalis and several other species, such as the wallflower (Εrysimum cheiri), the caper bush (Capparis orientalis) and the ivy (Hedera helix), and, finally, of ammophilus species near the beach, such as those of the genus Limonium. Regarding the avifauna of the area, the vertical cliffs also favour the occurrence of birds of prey, such as the European Honey-Buzzard (Pernis apivorus) and other species, such as swifts (Apus pallidus and Tachymarptis melba). It should be noted that in the past large birds of prey, namely, the Golden Eagle (Aquila chrysaetos) and the Booted Eagle (Hieraaetus pennatus), both Endangered species for Greece, have been recorded here.