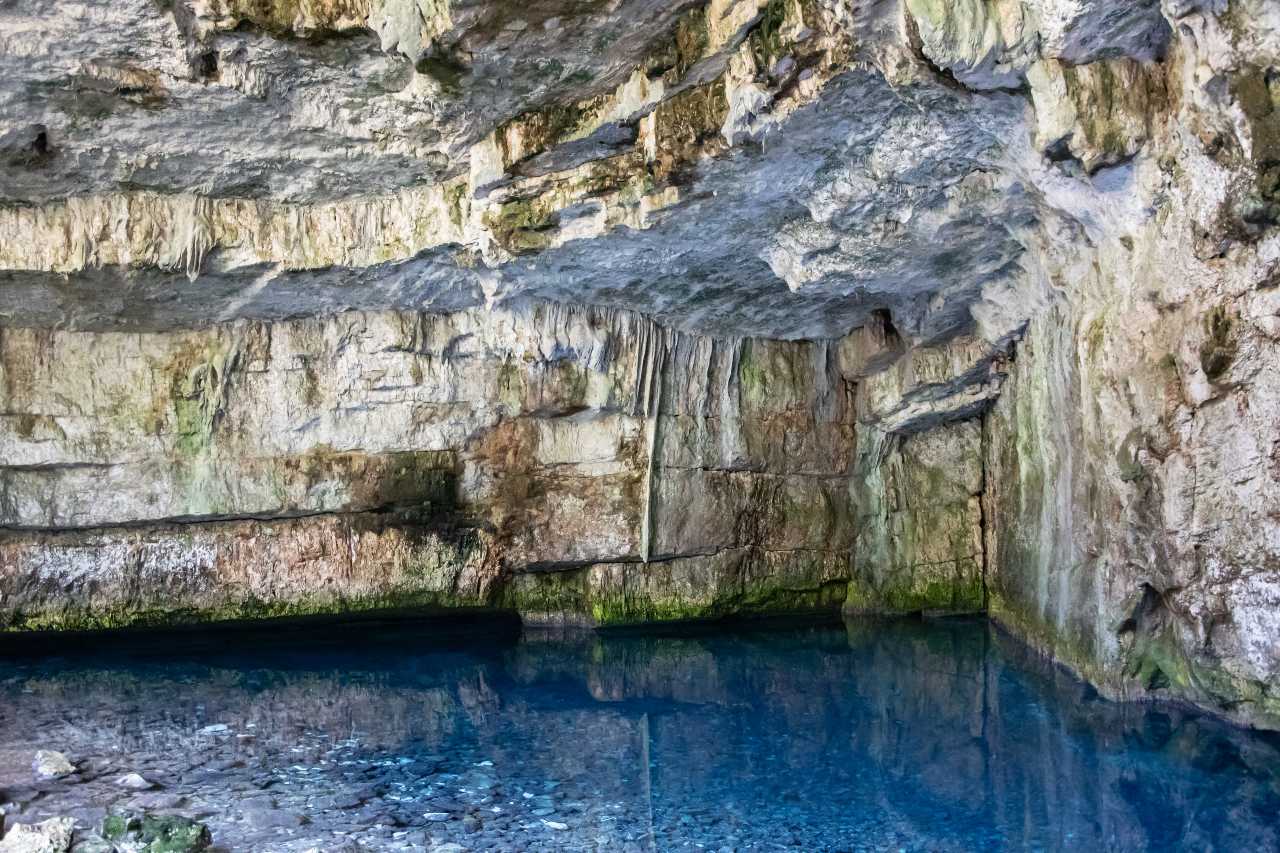 Zervati cave, which is also known as the «Blue Cave» is a cavern (or cenote?) located in the southern part of Karavomilos village, at an altitude of about 15 m and at a distance of almost 250 m from the sea. It constitutes part of the wider karstic network of the Sami area and apart from its geological value, the cave is of particular ecological interest since cave lake habitats host rare aquatic plants, fish and eels.

The cave develops in medium to thin bedded Cretaceous (Albian-Cenomanian 113-100.5 My) limestones of the Pre-Apulia zone, with NW-SE main orientation developing which are covered by alluvium and scree of Quaternary (Figure 1). The total length of the cave is 235 m and the average width is 30 m. The entrance of the cave, measuring 50x30m, has been created by the collapse of the roof of the pre-existing closed hall. The roof and walls of the cave are characterized by the presence of many stalactites. Due to the collapse of the roof, a debris cone (dome) was created, over 10m high, which is located in the center of the open part of the cave and consists its highest point.

On either side of the debris dome (NW and SE) there are two lakes of brackish water above which the roof is maintained. The southeast lake (Figure 2) has a maximum depth of 4 m while the northwest (Figure 3) 5 m. This part of the cave, which is visible, has a length of 75 m. The water level of the lakes is located at a depth of 16 m, at approximately the same with the sea level, whilst on the walls of the cave there is trace of the old level of the water lake, which was one meter higher from today. After underwater exploration indicated that the cave continues underwater on the side of the northwest lake and ends in a second chamber measuring 85x58m covered with water. The upper part of this chamber is exposed out of the water. At the north and south end of the west side of the chamber there are two siphons which end in impassable narrows, which clearly indicate that the cave continues and is connected to the wider karstic network of the area. As expected with all the siphons in the area, also here the bottom is covered with at least 10 cm of mud. The cave also continues underwater to the southeast lake with a siphon about 50m long.

The vegetation around the entrance to the lake cave includes typical arboreal species of the area, such as fig trees (Ficus carica), Carobs (Ceratonia siliqua), Kermes Oaks (Quercus coccifera), mastic trees (Pistacia lentiscus) etc. The shady conditions of the cave favour the occurrence of numerous species, both on its walls and floor, such as the Chaste Tree (Vitex agnus-castus), the Ivy (Ηedera helix), the bramble (Rubus discolor), ferns, such as the Maidenhair Fern (Adiantum capillus-veneris), as well as herbaceous plants, such as cyclamens (Cyclamen graecum). The aquatic fauna of the lake cave includes flatworms, small snails (e.g. nerits - Neritidae or mud snails - Hydrobiidae), small crustaceans (Cladocera - water fleas) and isopods (woodlice), all of which merit further study. The cave’s waters carry also European Eels (Anguilla anguilla - Critically Endangered, according to IUCN) and mullets (Mugil cephalus). Regarding retiles, the Greek Algyroides Algyroides nigropunctatus, a competent climber has been recorded, whereas, at dusk one might notice on trees the Edible Dormouse (Glis glis). Finally, among the most interesting birds that use the cave are the nocturnal birds of prey, Eurasian Scops – Owl (Otus scops) and Barn Owl (Tyto alba).